Oh, man, I am so happy to be writing this post! After an interminably long and brutally cold winter here in the Northeast, Spring has finally sprung. This is our second year having a vegetable garden at our house (you can read about the first year here), and I learned a lot about what works and what doesn’t during the first year. Last year I got kind of a late start so I ended up buying already started plants at a big box store, which really limited my options. This year I wanted to try some new things, and so I decided to plant everything from seed. I printed out this handy planting chart from the UNH Cooperative Extension, which was specifically designed for New Hampshire. I chose some early season vegetables that we really love and bought seeds to plant in one of our beds, with the other bed being reserved for more summertime vegetables. The front bed is now planted with (date planted in parentheses): dwarf blue curled kale (4/15); Calliope blend carrots (4/15); touchstone gold beets (4/18); chioggia beets (4/18); and detroit dark red beets (4/18). Yes, we really like beets. As of today (5/4), everything has sprouted! 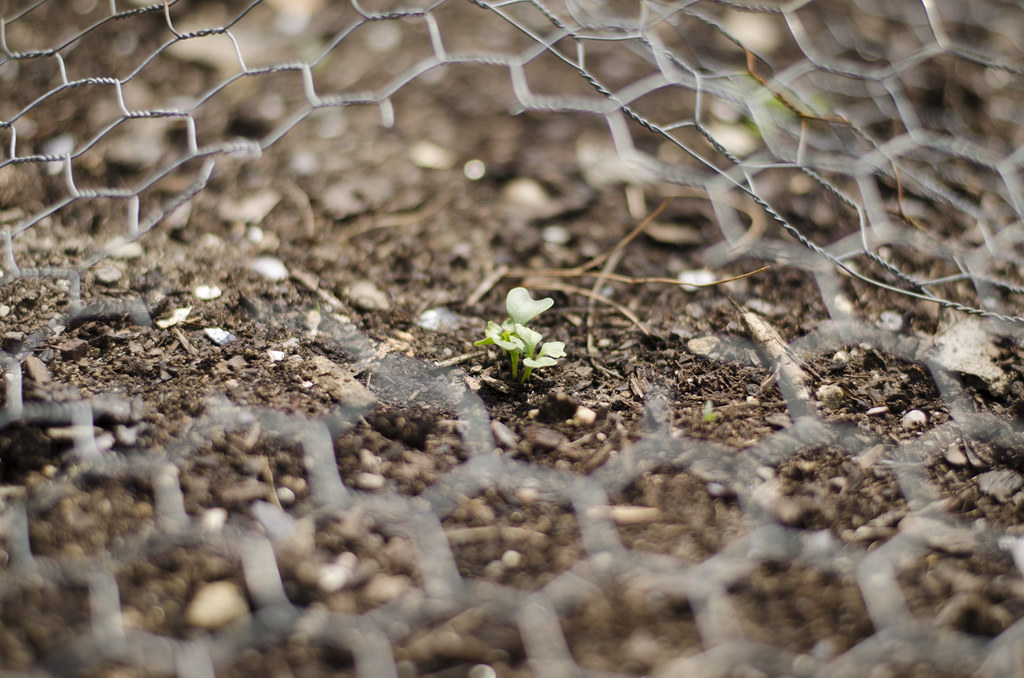 We also have the raspberry bushes that we inherited from our neighbor last year. My neighbor said that she usually cuts all of the canes down at the end of the season so that new ones grow up the following year. I was hesitant to do this because at the house we rented when we first moved to Walpole we had raspberry bushes and they were ever-bearers. What that means is that the growing cycle looks something like this: a new cane grows during the summer and produces berries near the end of the growing season; the next year that same cane will look dead at first, but will produce new leaves starting at the beginning of the season and will produce berries in the summer; in addition to the growth on the old cane, the roots will produce new canes, which will produce fruit at the end of the season; the old canes die for good at the end of the second growing season, but the new canes will produce again the following year, when they will be the new “old” canes. That might sound convoluted, but it basically means that if you cut down all of your canes at the end of the season, then you are missing out on an entire harvest. I was rewarded for my caution and patience by seeing lots of new growth on the “old” canes I planted last year so they must, indeed, be ever-bearers. I can’t wait for them to spread out more and produce lots of delicious berries in years to come. [Kind neighbor who gave me the bushes — this paragraph is not meant as a criticism of your method, which is totally fine and works great in areas with early frosts. But, if you want more berries you might be interested in this article.] 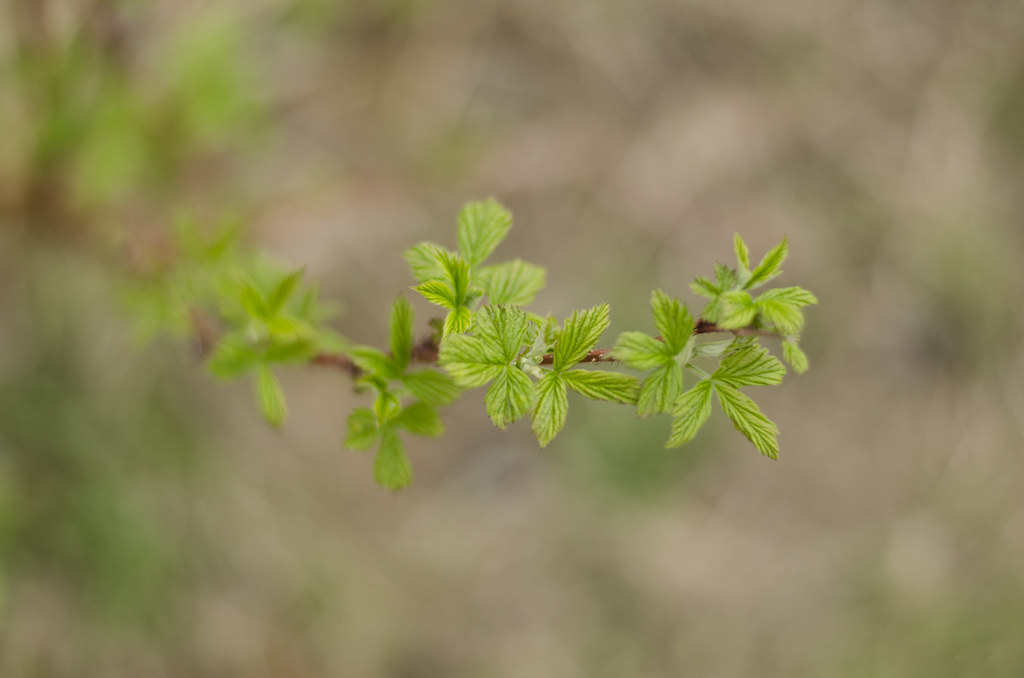 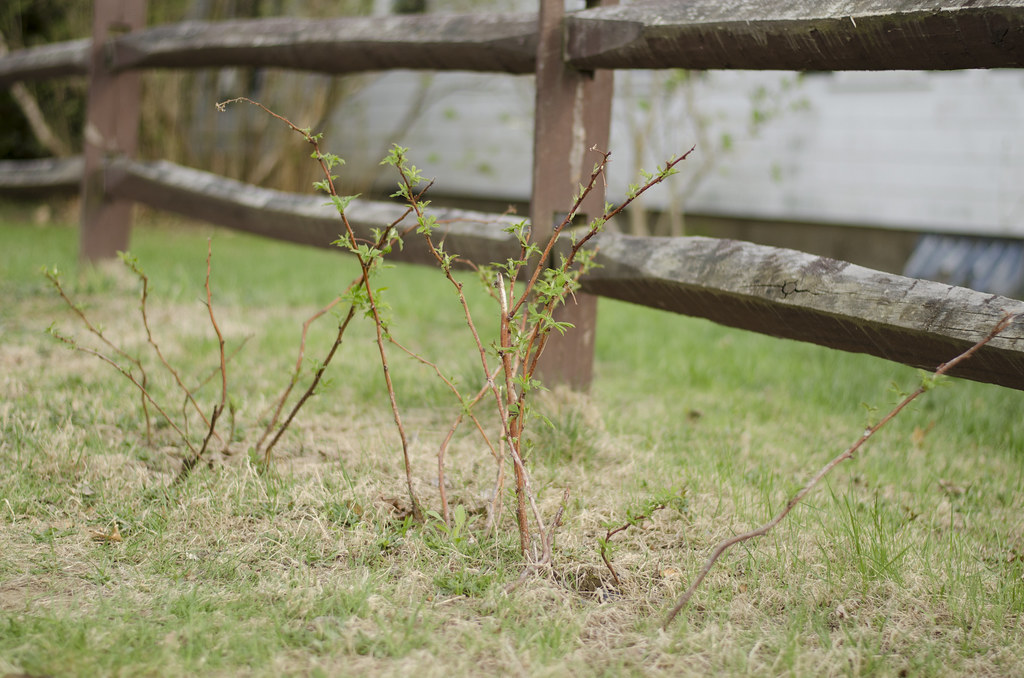 Our garden also has a new addition this year: a pea & bean teepee! My father-in-law graciously let me have some of his bamboo poles from last year (yes, he grows bamboo), and I made a pretty darn awesome teepee, if I may so myself. First, I dug a 3/4 circle trench in the ground, about six inches deep, and filled it with garden soil and compost. I left an opening for a “doorway” so that the kids can hang out inside of it when it is covered with vines. Next, Zane helped me trim down the bamboo poles to a standard 7 feet long with a hacksaw (bamboo can shatter if you aren’t careful, so a hacksaw with a fine-tooth blade is the way to go). Then I pushed the poles down into the ground in the trench I dug, about 3 inches or so, and did my best to lash all the poles together at the top. Finally, I wrapped twine all around the poles at about ten inch intervals, all the way up to the top. On April 18th our peas went into the ground, and nothing happened for over two weeks! I was so sad, and pretty sure that the cold weather we had right after planting had killed everything. Thankfully, I was wrong, and little pea shoots finally started popping up about three days ago. Now they’re almost an inch tall and so far they look healthy and strong. I can’t wait to see them fill in the teepee…and I also can’t wait to taste them! 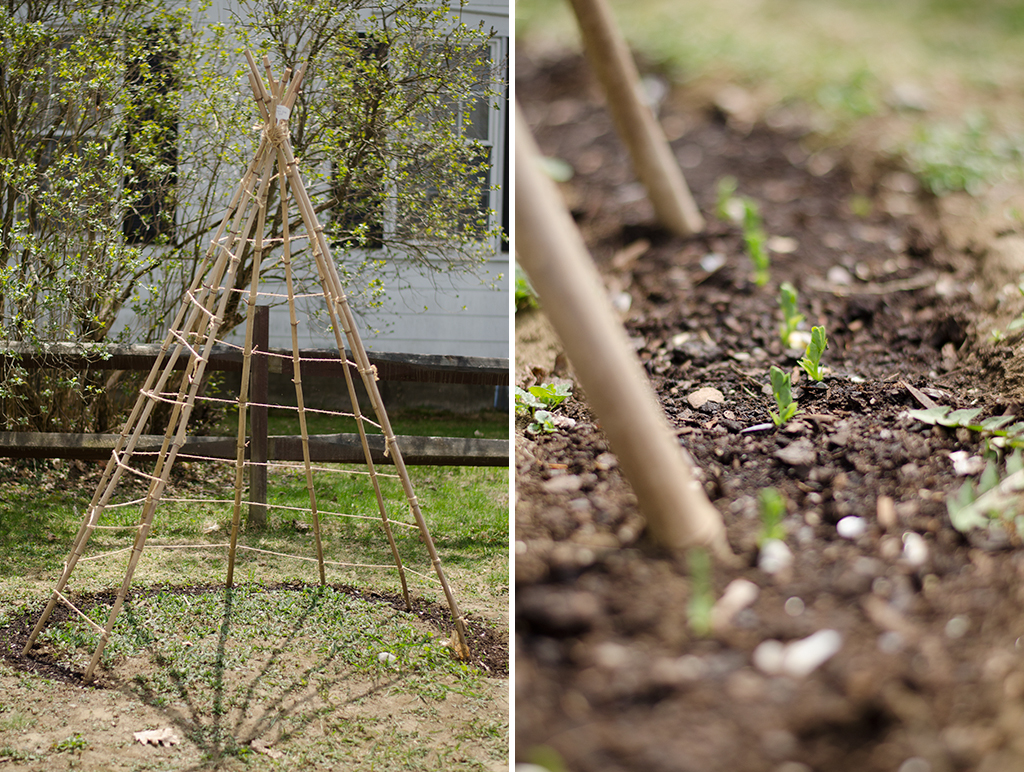 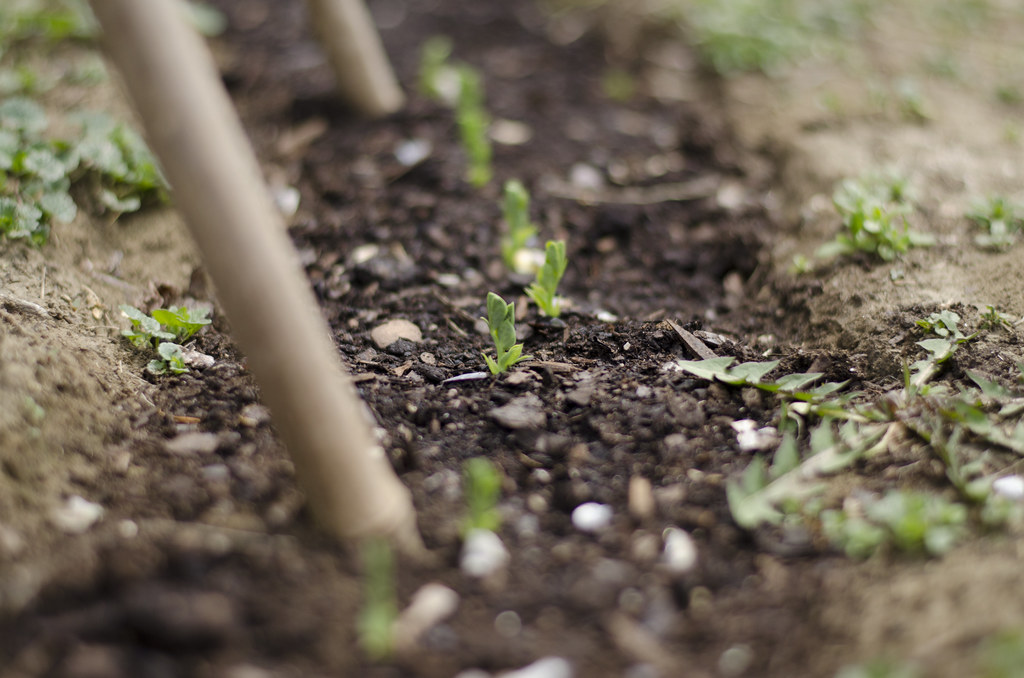 I have lots of plans for this little homestead of mine (no, I do not plan on raising any chickens). There is a crabapple tree growing just over the fence in the backyard which I have been trying to take care of the past few years. It didn’t do much last year, but the year before it had tons of crabapples on it, so I’m hoping for another good year this fall. I also dug up some unsavoury barberry bushes from the side of the garage (ouchy thorns + poisonous berries = no thanks!) and hope to replace them with blueberry & blackberry bushes as soon as I can get my hands on some. I’m also working on some sort of crazy trellis so that I can grow pumpkins vertically. I’ll update all summer long as our garden grows!