Awhile back I wrote that I had received a DNA testing kit from 23andMe as a birthday present from my husband. Genealogy has been a hobby of mine since I was a teenager, and I have wanted to have my DNA tested for genealogical purposes for a long time. Even just a few years ago the cost to test was prohibitive, but now it’s actually quite affordable (given that it’s a one-time expense, the $99 price tag for 23andMe seems pretty reasonable).

It was excruciating waiting for the results of my test, but I finally have some really interesting information to share! I’m going to start with the first bit of information that I received — my mtDNA haplogroup. I am certainly no scientist, so I am going to give you a brief explanation of what mtDNA is, and what it can tell you about your ancestry. mtDNA stands for “mitochondrial DNA” which you inherit only from your mother, which she inherited from her mother, which she inherited from her mother, and so on all the way back to the beginning of time. A haplogroup is simply a group of organisms that share a common ancestor. Once you know your mtDNA haplogroup, you can trace your mother’s mother’s mother’s, etc., line all the way back to wherever it started.

23andMe told me that my maternal line is U6a7, a subgroup of U6, which originated in Africa some 45,000 years ago. According to 23andme, the U6 group is found mostly in the Berber population. 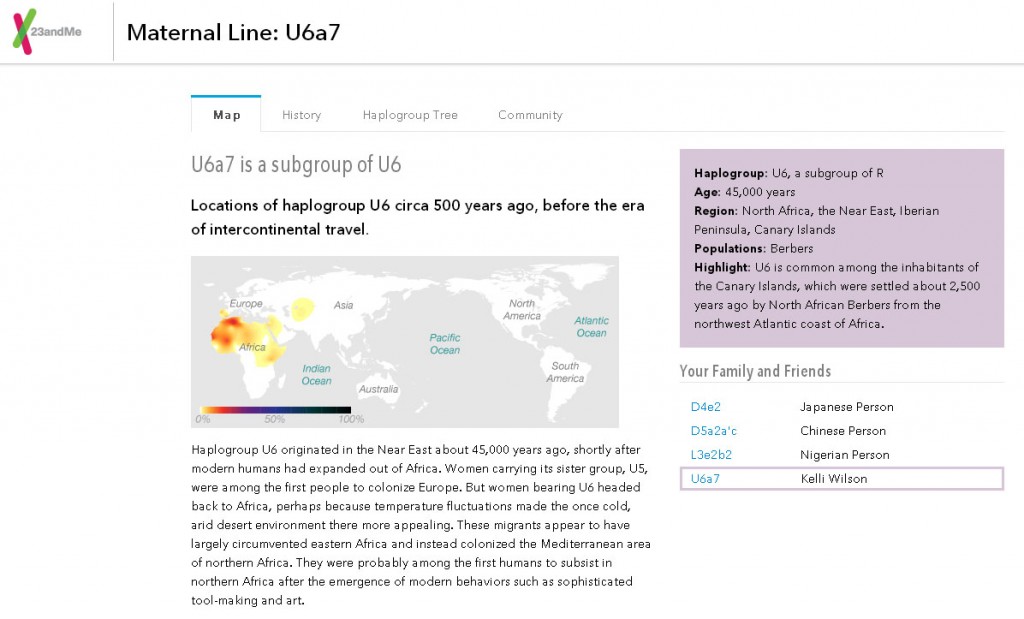 U6: The mitochondrial super-haplogroup U encompasses haplogroups U1-U7 and haplogroup K. Haplogroup U6 is among the oldest of the U haplogroups with an origin approximately 50,000 years ago. It is a rare, but ancient haplogroup, and individuals bearing this lineage out of the Near East may have encountered Neandertals as they moved around what is now the southern Mediterranean basin. In modern populations, it is found at highest frequency in Berber-speaking populations of North Africa and the Canary Islands. Its presence in Portugal and Spain is the result of recent admixture most likely related to the Moorish occupation of Iberia.

I have to admit that I was really surprised — North Africa? I know all of my ancestors back at least five generations, and no one was from anywhere near Africa (it’s a running joke that we’re 100% Irish, even though we’re actually European mutts). Something told me that U6a7, and especially U6, wasn’t the whole story, so I started hunting for information. I came across James Lick’s mtDNA haplogroup analysis program that analyses raw data from various big name companies, like 23andMe. The results of his test told me that I was most likely a member of the U6a7a group. That last little “a” makes a big difference as it puts my maternal line in France, rather than the Canary Islands, which makes a lot more sense to me given what I already knew about my ancestors before I took the test.

I started researching U6a7a, and discovered Bernard Secher’s U6 haplogroup mitochondrial DNA project. I decided to send him an email with my raw data to see what he thought. His information was really helpful in further narrowing down my maternal line. He wrote:

Your mtDNA sequence matches another sequence from New Foundland which was published by A. M. Pope (see his paper in the attached file). This sequence is published in the GenBank data base with the id: HQ287880 (see here: http://www.ncbi.nlm.nih.gov/nuccore/HQ287880). It is very interesting because Nova Scotia is just in front of New Foundland.
Another point very interesting, is that your sequence and the New Foundland one are very close from an acadian cluster whose members are all descendants of Catherine and Edmée Lejeune who married in Acadie around 1630 or 1640.

He also sent me this chart, as mentioned in his message (I’m the pink block, A5): 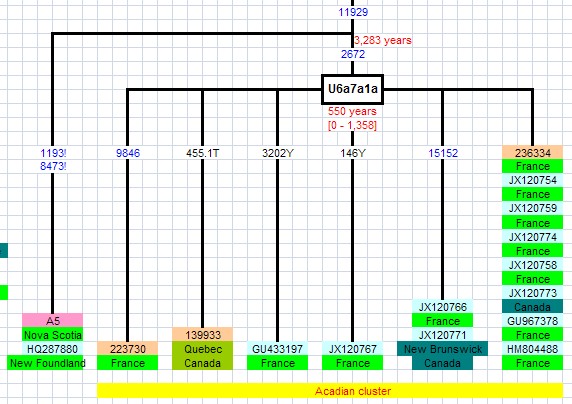 Bernard’s mentioning of the Acadian cluster made 100% sense to me, since my mother’s mother’s mother’s mother’s mother (so, my great-great-great grandmother) was French Canadian from Nova Scotia…so, yes, she was Acadian. Her name was Nathalie Mary Burridge, and she was born in 1858. She grew up in Salmon River, Digby, Nova Scotia. She married my great-great-great grandfather, William Twomey, and they had a bunch of kids together, living both in Nova Scotia and in Lynn, Massachusetts. When she was 87 years old and widowed, she moved back to Nova Scotia so that she would not be a burden to her family. She died five years later, at the age of 92. I don’t know if she traces her ancestry to either of the Lejeune sisters, though my guess is that I do probably have the second mutation and I am one of their descendants, or share a common ancestor with them. I am very eager to learn more about the Acadians now that I have both genealogical and genetic evidence of my connection to them.

I have learned so much from my 23andMe test, and I haven’t even received all of my results yet! I look forward to sharing it with you.

For now, I will leave you with a picture of my great-great-great grandmother, Nathalie Burridge, one of the bearers of my mtDNA. It is certainly humbling to be given the chance to look 5, 10, even 50,000 years into my past; to see and to imagine all of the events in the course of human history that made my life possible. I feel a little overwhelmed, emotionally, when I think about all of the mothers who lived and gave birth to daughters so that I could one day receive the gift of their mitochondrial DNA. And, it is an honor and a privilege to pass their gift on to my own children, who represent the next link in this unbroken chain. 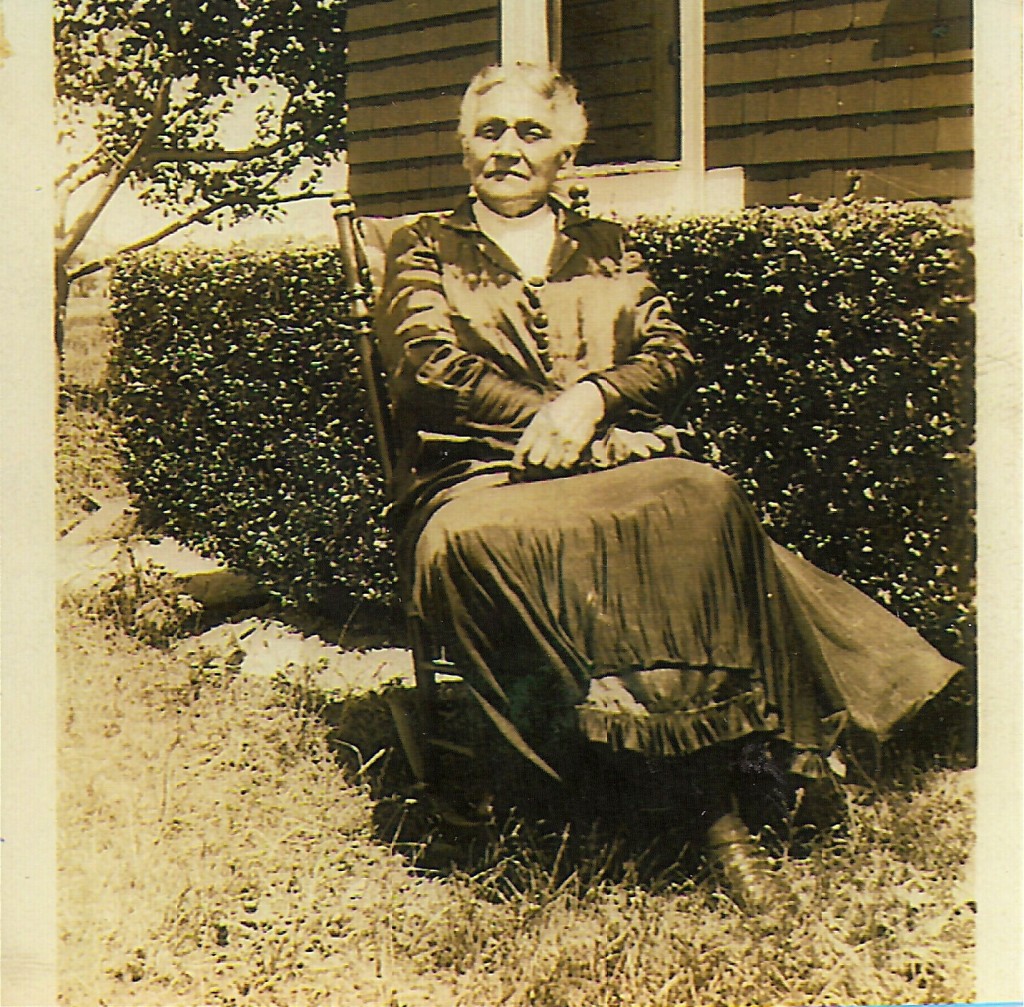