From “What Does the Easter Hare Have to Say to Children?” by Freidel Lenz:

The gentle rabbit, who never harms another animal, is a plant-eater and a rodent. He never shrieks except in peril of death, and then only a little. He does not have his own home; his lodge is here today and there tomorrow. People say he became the true picture of the Easter rabbit leaving his eggs in the spring because of his fertility. But other animals, such as the mouse, are much more prolific. The rabbit has exceptionally fine hearing; he is “all ears,” our Mister Longear. His eyes are sharp, not externally, but rather inwardly. One even says he sleeps with his eyes open. The number of his enemies is great. Hunters and dogs go after him. If he sees a comrade being chased who cannot go any further, he springs into his place and deceives the hunting dogs, while the other hides himself, and so he rescues his brother. It is all of these attributes, and especially the last one, which make the rabbit a noble and significant symbol. 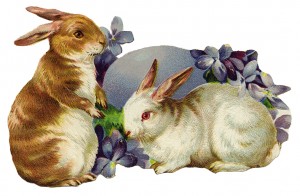 My children are growing up in a world where holidays are about gifts and treats, and it is often said of Americans that our holidays are “too commercial.” This may be true, but it doesn’t mean that we can’t bring meaning and purpose to celebrations in our own home. I really love Freidel Lenz’s analysis of the noble qualities of the rabbit. Though at first glance a simple creature, it is an animal with many qualities that we as exalted humans often lack — gentleness, kindness, and selflessness. The rabbit has much to teach us.